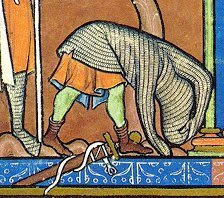 [A knight removing his hauberk, from the Morgan Bible, a medieval picture Bible, created in France in the mid-1200s.]

The word knight comes from the Old English word for "adolescent" because a boy would be knighted at about age 20. Chivalry comes from the word "horse." That's because a knight's horse distinguishes him from a common foot soldier and proves that he is a professional warrior. The knight also needed heavy weapons and armor, so battle horses were enormous, costly animals.

A proper knight also had a squire or shield-bearer, who was often a knight-in-training, along with up to a half-dozen other attendants to care for the horses and arms, guard prisoners, and help him get up onto the war horse, no small feat while clad in heavy iron armor. We rarely see them in Amadis, since servants in general are invisible in this work, and since the original audience knew what was going on in the background.

All this material and manpower was expensive. If money or even in-kind payments existed in Amadis, a lot of it would change hands. Knights in real medieval times maintained themselves by taxing land granted for their service and by holding captives for ransom.

In reality, knights were professional fighters, elite warriors who served a king or lord in exchange for fiefdoms or financial support. Training began as boys and was limited to nobles. The religious vow dignified their status beyond that of mere hired sword. Or it was supposed to. History tells us that some knights were better than others.
+
Posted by Sue Burke at 4:25 AM