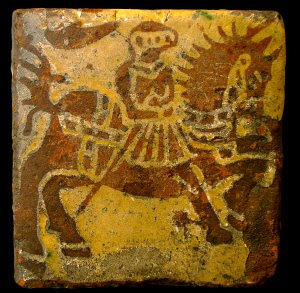 The knight-errant Amadis is sort of a combination of Dudley Do-Right and James Bond. Like Dudley Do-Right, the cartoon Canadian Mountie, he is a "lonely defender of justice and fair play: handsome, brave, daring," who always does right and always gets his man. But like Bond, James Bond, he has a license to kill. And he has a magic lance to help him do it.

Amadis is a super-hero as well as a paragon knight.

But what were real knights supposed to do? In medieval Iberia, royal courts encouraged tales like Amadis as a means to instill good behavior among their knights.

Spanish author Ramon Llull, in the 1283 manual Book on the Order of Knighthood, says:

"The knight must ride, joust, fight, bear arms, take part in tournaments, participate in round tables, fight with swords; hunt deer, bears, wild boars, lions; and do all the other things like this that are part of the office of knight, since by all these things knights become adept at deeds of arms and maintaining the order of chivalry....

"The knight must hesitate more before the vituperation of the people than before death; and shame must cause more suffering to his spirit than hunger, thirst, heat, cold, or other discomfort or physical effort.... Chivalry... commences with justice and by protecting humble men against the prideful and unjust."

Knights pledged before God to protect the weak, defenseless, and helpless, and fight for the general welfare of all. Or at least they were supposed to. Ye have heard tell of evil knights from the beginning of this novel.

Amadis shows us a shining example of chivalry: loyal, obedient, humble, chaste, pious, and ever willing to do justice and protect the weak. Evil-doers must die, and he's the man to take them out.
+
Posted by Sue Burke at 3:16 AM