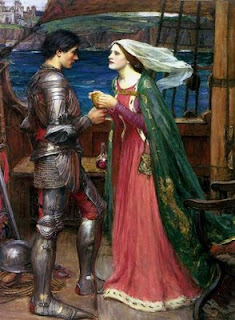 [Tristan and Isolde with the Potion, by John William Waterhouse, 1916. Waterhouse (1849-1917) belonged to the later phase of the Pre-Raphaelite Brotherhood. The knight Tristan and Princess Isolde shared a love potion, which led to tragedy.]

Over time, the meanings of words can shift. Here are some words to watch out for:

Amadis would have understood that word in its most basic sense: an armed group of men on horseback. (It has the same roots as cavalry: "horse," cheval in French.) He also would have understood the term to encompass the rank and sacred responsibility that he assumed when he became a knight (caballero in Spanish), since in his day, as trained and well-armed soldiers, knights enjoyed both great esteem and great power.

Over time, as knighthood became more ceremonial, the term lost its lethal-weapons element and centered more on rank and honor, as well as on social elements such as courtesy, honor, and gallantry toward women.

These days, the meaning of chivalry sometimes settles on that last element: gallantry toward women. A chivalric man opens doors for them, pulls out their chairs, and such. Amadis might have been perplexed by that. He had servants to do those sorts of things.

Amadis of Gaul is a romance: It is a medieval popular fictional work of poetry or prose about chivalric heroism written in a vernacular, romance language such as French or Spanish rather than in Latin. These stories often include a love story as well as adventures and bloody battles. The tales of the King Arthur cycles were important medieval romances, inspiring medieval authors like Créchien de Troyes. Amadis, Tristan, Isolde, Merlin, the quest for the Holy Grail, the Knights of the Round Table, Lancelot, Guinevere, and Percival are elements of Arthurian literature.

As the centuries moved on, romance came to mean simply "novel," a work of book-length fiction.

These days, in English, romance refers almost exclusively to love and emotional attachment. According to the Romance Writers of America, "two basic elements comprise every romance novel: a central love story and an emotionally-satisfying and optimistic ending." Happy endings are not guaranteed in medieval romances.

The term romanticism refers to the artistic, literary, and intellectual movement in the second half of the 18th century in western Europe that stressed emotion rather than rationalism, and sometimes reached back to medieval romances and art for pre-industrial and pre-neoclassic "authentic" elements. Tales of King Arthur and his Round Table (though not the tales of Amadis) were revived by writers like Alfred Lord Tennyson, whose re-imaginations of the legends mark our Arthurian imagery to this day, as seen in the movie Monty Python and the Holy Grail.

Romanesque is a style of European architecture from the 11th and 12th centuries that contained Roman and Byzantine elements, such as barrel vaults.

This architectural style flourished in Europe from 12th to 15th centuries and can be easily distinguished by its pointed arches, distinct from Roman and Greek styles. But gothic can also mean "medieval." The first Goths were Germanic tribes who settled much of Europe after the fall of the Roman empire.

The 1765 novel by Horace Walpole, The Castle of Otranto, a Gothic Story, added the notion of terror and gloom to the definition of medieval, and soon gothic romances sprang up, which were a type of horror story, including Mary Shelley's Frankenstein and Bram Stoker's Dracula. These days, urban goths favor vampiric aesthetics.

The word novel as a name for a kind of book-length narrative comes from the Italian word novella, or "piece of news," since these books recount events, albeit fictional.
+
Posted by Sue Burke at 3:42 AM