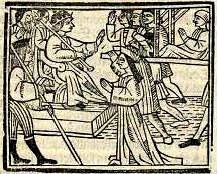 [Woodcut from the 1526 edition, printed in Seville by Jacobo and Juan Cromberger.]

How three days after the Childe of the Sea left the court of King Languines, three knights arrived, along with another knight in a litter and his traitorous wife.

Three days after the Childe of the Sea left the house of King Languines, where he had been knighted, the three knights arrived, bringing the dishonest lady and her husband, the badly wounded knight, on a litter. The three knights placed the lady in the hands of the King on behalf of a new knight and told him what had happened. The King crossed himself many times when he heard of the woman's treachery and was very grateful to the knight for sending her.

No one knew that the Childe of the Sea was that knight, except for his lady Oriana and the other damsels, as ye have heard earlier. Instead, everyone thought that he had left to see his foster-father Gandales.

The King said to the knight in the litter:

"A woman as treacherous as your wife should not be allowed to live."

"My lord," he said, "do as ye must, but I will never consent to killing the thing that I love most in the world."

He bid farewell to the King and had himself carried out in his litter.

The King said to the lady:

"By God, he was more loyal to you than ye to him, and I will make you pay for your disloyalty." And he ordered her to be burned.

The King wondered a great deal about who could be the knight who had sent them, and the squire in whose castle the Childe of the Sea had stayed said:

"Perhaps he was the new knight who was with me and a damsel from Denmark who arrived here today."

"What knight is this?" the King said.

"My lord," the squire said, "he is very young and so handsome it is a marvel to see him, and I saw him fight so well and so quickly that if he has the good fortune to live, he will be the best knight in the world."

Then he told the King what he had seen and how he had saved King Perion from death.

"Do ye know what his name is?" the King said.

Then the King and everyone wanted more than ever to know it. The squire said:

"The damsel spent more time with him than I did."

"Is the damsel here?" the King said.

"Yes," he said. "She has come to ask for the daughter of King Lisuarte."

Then the King ordered her to come before him, and she told what she knew and how she had traveled with him because the damsel who gave him the lance had said that she brought it to the best knight who could hold it in his hands.

But the Chide's beloved did not doubt who it could be. Whenever he was mentioned, she felt great distress because the damsel had told her that she came to ask to take her home, and Oriana knew that the King would agree to send her to her father. If she left, she would not receive such frequent news about he whom she loved more than herself.

Six days passed without more news about him. Then while the King was talking to his son Agrajes, who wished to leave with his war party to Gaul, a damsel entered the room, knelt before them, and said:

"My lord, hear me now before your father."

Then she picked up a helmet so damaged by a sword that no part was left whole, gave it to Agrajes, and said:

"My lord, take this helmet in place of the head of Galpano. I give you it on behalf of a new knight, who is more worthy to bear arms than any other knight in the world. He sent you this helmet because Galpano had dishonored a damsel who traveled in your service."

"What?" he said. "Is Galpano dead at the hands of a knight? By God, damsel, ye have told me something wonderful."

"It is true, my lord," she said. "This knight defeated and killed many men in his castle, and finally he fought him alone and cut off his head, and because it would be offensive to bring that, he said this helmet would suffice."

"Surely," the King said, "that was that same new knight who did this, for in truth his deeds of chivalry are like none other." He asked the damsel if she knew his name.

When he heard this, the King was astonished, as was everyone else, and he said:

"Whoever he went to, asking to be made a knight, he cannot be blamed. The Childe had begged me for a long time to do it, but I delayed, and I did wrong to postpone knighthood to someone who has done such good works."

"Where can we find him?" Agrajes said.

"He commended himself to you," she said, "and told me to tell you that ye will find him at the war in Gaul, if ye go there."

"By God, what good news you tell me," Agrajes said. "Now more than ever I wish to go, and if I find him, I will never willingly be parted from him."

"That would be right," the damsel said, "for he loves you very much."

Great was the joy that all felt with the good news about the Childe of the Sea, most of all his lady Oriana, though she kept it secret more than ever. The King asked the damsels how he had been made a knight, and they told him everything. He said:

"He received more courtesy from you than from me, but I delayed only for his own good, since I thought he was too young."

The damsel told Agrajes the message that she carried, which the story shall recount farther along. He left with a very good party of knights for Gaul.
+
Posted by Sue Burke at 3:36 AM