Why kings hunt so often 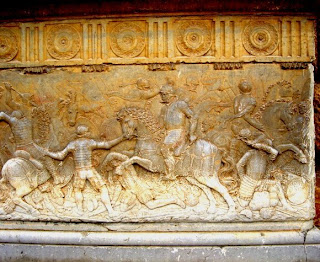 [From the facade Palace of Charles V, begun in 1526 and never completed, in the Alhambra, Granada, Spain. Photo by Cindy Van Vreede]

As ye have heard, kings, princes, and knights often go out hunting. This was not just to put meat on the table. Noccoló Machiavelli, in his 1514 book The Prince, explains why they should hunt, and it tells us something key about their role:

"Chapter XIV. How a prince should organize his militia

"A prince, therefore, must have no other object or thought, nor acquire skill in anything, except war, its organization, and its discipline. The art of war is all that is expected of a ruler....

"So he must never let his thoughts stray from military exercises, which he must pursue more vigorously in peace than in war. These exercises can be both physical and mental. As for the first, besides always keeping his men well organized and trained, he must always be out hunting, so accustoming his body to hardships and also learning some practical geography: how the mountains slope, how the valleys open, how the plains spread out. He must study rivers and marshes; and in all this he should take great pains.

"For example, the hills and valleys, the plains, the rivers, and the marshes of Tuscany have certain features in common with those of other provinces; so with a knowledge of the geography of one particular province one can easily acquire knowledge of the geography of others. The prince who lacks this knowledge also lacks the first qualification of a good commander. This kind of ability teaches him how to locate the enemy, where to take up quarters, how to lead his army on the march and draw it up for battle, and lay siege to a town to the best advantage...."

— translation by George Bull, available as a Penguin Classics book