Wars are won, weddings are celebrated, and the story continues. 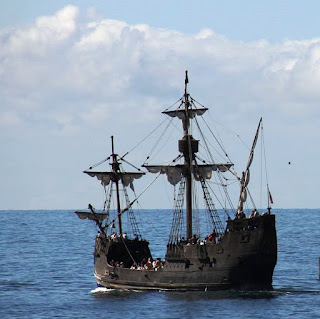 A carrack, a three- or four-masted ocean-going sailing ship that was developed in the 14th and 15th centuries in Europe. Christopher Columbus’ ship the Santa María was a carrack.

Amadis has provoked a war with King Lisuarte. The King sent his daughter, Oriana, off in a fleet of ships to marry the Emperor of Rome, and Amadis and his friends attack the fleet, defeated it, and take Oriana to safety at Firm Island, which belongs to Amadis. Few people know that Oriana and Amadis are secretly in love. In fact, they even have a son named Esplandian, who has been raised since infancy by a holy hermit named Nasciano.

For the war, King Lisuarte has received aid and troops from the Emperor of Rome, among other allies. Amadis is supported by his old friends and by new friends he made during his years of travel as a knight errant. They have sent troops and supplies, and his army is led by his father, King Perion.

Meanwhile, Arcalaus the Sorcerer, who is a sworn enemy of Amadis, has raised his own army, allying with King Arabigo of Arabia. They plan to wait until the other two armies have exhausted themselves fighting, and then will swoop down and conquer them both.

After some hard battles, in which Amadis kills the Emperor of Rome, both sides have suffered great losses, but Lisuarte’s side is so weakened that he knows he will be defeated if another battle is held. At this time, the hermit Nasciano comes to make peace. With permission from Oriana, he tells Lisuarte that she and Amadis are married and that the boy Esplandian is his grandson. Nasciano then speaks to Amadis and Perion, and they all agree to peace.

The armies of King Perion and King Lisuarte withdraw. Lisuarte has known for some time that Arcalaus and King Arabigo are present with an army, but he does not know where. As Arcalaus is about to attack Lisuarte’s troop, Esplandian and a friend are riding to Lisuarte to deliver a message. They see Arcalaus’s troops charging down a mountainside toward the remains of Lisuarte’s army, which is retreating as fast as possible to take refuge in a town.

Esplandian rides to the other camp and informs Perion and Amadis, and Amadis gathers up some troops and gallops off to rescue King Lisuarte, followed by Perion and the rest of the army.

King Lisuarte and his men fight bravely, suffer bad casualties, and barely make it inside the walled town. They hold off their besiegers for the rest of the day. But they are few, and the town’s wall is in poor shape. They cannot resist for long.

Amadis and his men ride all night, arrive at dawn, and attack. By then the troops of Arabigo and Arcalaus have entered the city. Lisuarte and his men are fighting to the death, when Amadis’s troops, cheering “Gaul! Gaul!” sweep in and are victorious. Arcalaus and King Arabigo are captured. King Lisuarte and Amadis greet each other with an embrace. King Perion arrives, and with Nasciano’s help, a lasting and joyful peace is negotiated.

Everyone is told that Amadis and Oriana were secretly wed, and Amadis pledges to be a loyal and loving son-in-law to King Lisuarte. Esplandian is surprised and pleased to learn that Lisuarte and Perion are his grandfathers and Amadis is his father.

King Lisuarte goes back to Great Britain to bring his wife and younger daughter to Firm Island for the wedding between Amadis and Oriana. The younger daughter will marry the new Emperor of Rome.

King Perion and his troops return to Firm Island, where formal weddings are planned between Amadis and Oriana, and between other fine ladies and brave knights and royalty.

Sir Bruneo of Bonamar, Angriote d’Estravaus, and Branfil sail to Gaul. There they pick up Amadis’ mother and brother to return with them to Firm Island for the wedding. While at sea, they encounter a ship carrying the Queen of Dacia, whose son-in-law has taken her kingdom by treachery. The three knights go off to right that wrong while the others continue to Firm Island.

Sir Bruneo of Bonamar, Angriote d’Estravaus, and Branfil, with the Queen of Dacia, travel to her kingdom, and by their courage and superior military tactics, manage to retake it for the Queen and her two sons.

King Lisuarte and his family arrive at Firm Island, to great joy and festivities. Then to everyone’s surprise, Urganda the Unrecognized, a sorceress who has helped Amadis often in the past, arrives in a huge smoking dragon as a ship.

On the morning before the wedding day, Oriana and some other ladies take the tests of the Enchanted Arch of Loyal Lovers and the Forbidden Chamber, which no one can enter. Only Oriana passes them both, breaking the spell, and the wedding feast is held in the beautiful Forbidden Chamber.

Urganda the Unrecognized delivers a prophecy that Esplandian will be outstanding when he becomes a knight, then she sails off, but she leaves the dragon to serve Esplandian when the time comes. Kings, Queens, knights, ladies, and other nobles return home. Others make plans to take the kingdoms of Arabiga and Sansuena, whose leaders have been killed or captured in the most recent war.

Now at peace at Firm Island, Amadis is out hunting one day when he is approached by Darioleta, a lady who serves his father and who has arrived in a boat. An evil giant has killed her son and taken her family prisoner. Amadis rushes off with her to rescue them. The giant is named Balan, and because Amadis had killed his father some time ago in a war, Balan wants to kill Amadis. Without revealing who he is, Amadis challenges the giant, and in a difficult fight, Amadis defeats Balan but does not kill him. The giant’s troops attack, and Amadis takes shelter among some rocks.

When the giant recovers consciousness in his castle, he reminds everyone that he had promised that the knight would be safe, regardless of the outcome of the fight. He has Amadis brought to the castle, surrenders, and promises to make amends to Darioleta. He is shocked to learn that his opponent is Amadis, and to keep his word, Balan offers him his friendship.

Meanwhile, back at Firm Island, a friend of Amadis, a knight named Grasandor, goes in search of Amadis. He has a complicated adventure during his travels, and finally finds Amadis.

Amadis and Grasandor set sail for Firm Island and on the way visit an island called the Peak of the Enchanting Damsel. The damsel is long gone, but she left behind an enchanted treasure, and Amadis wants to see if he can break the enchantment. On the island’s mountaintop, they realize the treasure is meant for Esplandian, but as they are leaving, they encounter Gandalin, Amadis’s former squire, now a knight. He is pursuing a knight who stole a damsel and who might be hiding on the island. They find him and the damsel, and Amadis manages to reconcile everyone.

When they return to Firm Island, Amadis is met by a lady who gets him to pledge to help her release her husband, who is imprisoned. Then he learns that her husband is Arcalaus. Against his will, he lets Arcalaus go, who promises to be his mortal enemy again, although eventually the sorcerer’s virtuous wife convinces him to live in peace.

Balan, meanwhile, now that he is a friend to Amadis and his family and friends, goes to help Sir (now King) Galaor and other kings and knights in their fight to conquer the kingdom of Arabigo.

Balan is welcomed by Galaor and all the others, and Balan pledges his help.

Balan persuades his old friend, King Arabigo, to surrender his kingdom. Then Balan and other knights go on to conquer the Kingdom of Sansuena, and the story returns to what has been happening to King Lisuarte.
+
Posted by Sue Burke at 6:00 AM