How Agrajes, Sir Cuadragante, and Sir Bruneo of Bonamar, with many other knights, came to see the giant Balan, and what happened. 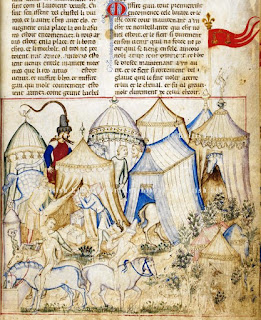 [From the Roman du Roy Meliadus de Leonnoys, produced in Naples, Italy, in about 1352. King Meliadus was the father of Tristan in the Arthurian legend. At the British Library.]

When they learned the giant had arrived, Agrajes, Sir Cuadragante, and Sir Bruneo of Bonamar took Angriote d’Estravaus, Sir Gavarte of the Fearful Valley, Palomir, Sir Brian of Monjaste, and many other knights of high esteem who were there to help win those realms, as ye have heard, and they all went to the encampment of King Galaor and Sir Galvanes, where the giant was lodging. They found him in Sir Galvanes’ tent, which was as fine and well-worked as any emperor or king could have had, and which he had acquired from his wife Madasima, who had inherited it from her father Famongomadan.

Each year, Famongomadan had ordered the tent be erected in a field in front of the Castle of the Boiling Lake, and he had his son Basagante sit on a fine platform with all his relatives, who were numerous and who obeyed Famongomadan like a lord for his great might and wealth. His vassals and many other people whom he had subjugated by force of arms kissed his hand as King of Great Britain. With that thought he had sent word to King Lisuarte to ask for Oriana to wed his son Basagante, and because he would not give her, Famongomadan had initiated a very cruel war at the time that Amadis killed them both when he rescued Leonoreta, Oriana’s sister, and the ten knights who were being held prisoner with her, as the second book of this story has recounted at length.

When these knights arrived, the giant was disarmed and wearing a cape of yellow silk finely decorated with golden roses. And as he was large and handsome and in the flower of maturity, he seemed attractive to everyone, and even more so after they had spoken, because they knew the coarse character of giants, who by nature were very disagreeable and arrogant and not given to obey reason, and they had not expected that any giant could be as completely different as Balan was. They appreciated him much more for this than for his great valor, although many of them knew the great feats at arms he had done, because great courage without good manners and discretion is often abhorrent.

As they were all together in that great tent, the giant looked at them and they seemed so outstanding that he could not believe that anywhere else there could have been so many and such fine knights. And when he saw that they had become quiet, he said:

“If ye are surprised that I have come here to your aid unexpectedly, since ye had very little hope or prospect for it, so am I. Truly, I would not by any means have believed that I would find a reason to cease to be your mortal enemy and opponent until my death. But as the execution of plans is in the hand of God rather than in the hand of those who wish to carry them out with rigor, among the many mighty and difficult battles that happened to my honor I was overcome during one that constrained my intentions at the start and in the end changed my own will to hold in honor what for all the days of my life I had considered dishonor to the point of requiring vengeance.

“When the thing I had most desired in this world was fulfilled, then my time of great ire and rigor and severity was ended and satisfied not by the way I had expected but by the way my most contrary fate was pleased to take. As ye know, I am the son of the valiant and courageous knight Madanfabul, lord of the Island of the Vermilion Tower, whom Amadis of Gaul, when he was called Beltenebros, killed in the battle fought between King Lisuarte and King Cildadan.

“And as I am the son of such an honorable father and was utterly obligated to avenge his death, never could I forget the deep desire of the way to carry this out: to take the life of the man who took it from my father. And when I had the least hope of that, fortune, along with the bravery of that knight, brought him to my grasp, arriving alone in my realm with no one to aid him, and by him and his great fortitude I was defeated and treated with the greatest courtesy by the man in whom fortitude and courtesy are fulfilled more than anyone alive.

“As a result, the great and mortal enmity I had felt became even greater friendship and true love, which has given me cause to come, as ye see, knowing that there might be a need for troops in this army, and believing that the honor and advantage for you will in its greater part come to him.”

Then he told them from the beginning everything that had happened to him with Amadis, and the battle they fought, and all the rest that occurred, leaving nothing out, as this story has recounted to you. And finally he told them that until that war was over, he would not leave their company, and when it was ended, he wished to go immediately to Firm Island, as he had promised Amadis.

All those lords took great pleasure in hearing what he said because, although Gandalin had told them how Amadis had fought with the giant and defeated him, they did not know the reason for it until he had recounted it. And they were very pleased by his arrival, both for the worth of his personage and for the numerous and very good men of war he had brought with him, which they needed, given those they had lost in previous confrontations. They gave him great thanks for the good will with which they had been offered out of love for Amadis.