[What Balan did as soon as he could leave his bed.] 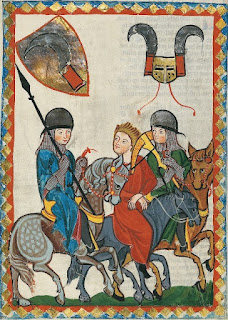 [Knights with a lance and a crossbow, page 361r from the Codex Manesse, made in Germany in 1304. At the Universitätisbliothek Heidelberger.]

But now the story shall cease to speak of Amadis and Grasandor and shall recount what was done by the giant Balan of the Island of the Vermilion Tower. The story says that two weeks after Amadis and Grasandor left the Island of the Vermilion Tower, where they had left the giant Balan injured, he arose from his bed and ordered many precious jewels be given to Darioleta and her husband and daughter, and a very fine ship in which they could leave. And he sent with them his son Bravor as he had promised Amadis.

Immediately after they had left, he had a great fleet prepared with his ships, of which he had many, and other ships he had taken from those who had traveled there, and he had them loaded with weapons and men and all the provisions they would hold, and he went out to sea with very favorable weather.

He traveled so fast without any difficulty that ten days later he arrived at the port of a small village called Licrea in the realm of King Arabigo. There he learned about the lords who had the great city of Arabia very well besieged, especially after Sir Galaor, King of Sobradisa, arrived with Sir Galvanes. He immediately had all his men disembark with their horses and arms, and the crossbowmen and archers, and all the other equipment for an encampment. He left the fleet with enough guards to keep it safe and went directly to the place where he knew that King Sir Galaor and Sir Galvanes were.

When they learned he was coming from the giant’s messengers, they and a great many companions mounted and went out to receive him. The giant arrived with his very good company of men and himself, wearing fine armor riding a handsome large horse, and few could have looked as good and handsome as he appeared in his grandeur.

They already knew what had happened between him and Amadis, for Gandalin had told them. Sir Galaor placed Sir Galvanes ahead, although he was not equal in rank, because he was much older and because of the great lineage from which he came and for his fine personality: Amadis and his brothers and Agrajes had always treated him with great courtesy for those things. The giant did not know him for he had never seen him, although he knew a great deal about everything he had done because Madasima, Galvanes’ wife, was a niece of Balan’s mother, who was also named Madasima, as ye have been told.

And when he arrived, the giant said:

“No,” he said, “I am Sir Galvanes, who greatly esteems you.”

Then the giant embraced him and said:

“My lord Sir Galvanes, given how we are of the same family, we should not have let so much time pass without meeting, but I had an enemy with whom ye had a great friendship, which gave cause to that delay. But now this has been ended by the hand of he who in discretion and courage has no equal.”

King Galaor arrived laughing and with good will embraced him and said:

“My good friend and lord, I am he for whom ye ask.”

Balan looked at him and said:

“Truly your appearance is a good witness to that, for ye resemble he who has given me cause to wish to know you.”

The giant said that because Amadis and Galaor greatly resembled each other in so many ways that they were often mistaken for each other, except that Sir Galaor was a little taller and Amadis a bit broader.

This done, they rode with King Galaor between them and went to their encampment, and Sir Galvanes brought Balan to his tent while his lodging was being prepared, where both of them were served as they should and ought to be.