Summary, backstory and Chapters 31 to 35

King Lisuarte's festivities turn into a total disaster, but fear not. Amadis will save day! 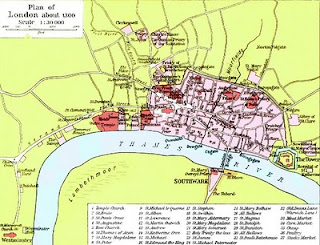 A map of London in 1300 from the historical atlas of William R. Shepherd.

Amadis is born out of wedlock to King Perion of Gaul and Princess Elisena of Little Brittany, and as a newborn he is cast into the sea. He is rescued, raised by a Scottish knight, and called Childe of the Sea. At age 7, he and the knight's son, Gandalin, are taken by the King of Scotland to be raised in his court. There, at age 12, he meets Princess Oriana of Great Britain, then 10 years old, and they both fall in love at first sight, but they dare not tell anyone, even each other.

Later, to try to be worthy of her and despite still being a teen, the Childe of the Sea becomes a knight, and Gandalin becomes his faithful squire. After several adventures in which Amadis proves his extraordinary valor and skill, he saves King Perion's kingdom from invasion and learns his true identity. Many more adventures follow, and he makes some lasting friends – and enemies, including Arcalaus the Sorcerer.

Meanwhile, his brother Galaor, who had been kidnapped as a toddler by a giant, also becomes a knight. He is the equal of Amadis in valor, skill, and good looks, though not in intellect – and while Amadis is true to his love Oriana, Galaor tends to bed every damsel in distress that he rescues.

By then, Amadis and Oriana have declared their love to each other, though it remains a secret to all but their closest friends. Amadis learns that he has a brother, so he goes in search of him and has many thrilling adventures on the way. In one, he promises a beautiful girl, Princess Briolanja, that he will return to help her take back her kingdom, which had been stolen from her by her uncle.

Amadis finds his brother Galaor, and they go to King Lisuarte's court together, rescuing some damsels in distress on their way. Meanwhile, back at the palace, Lisuarte, King of Great Britain and Oriana's father, has promised a mysterious young damsel that he will prove to her that he is worthy to reign over Great Britain in the court that he will soon hold in London.

Amadis and Galaor are received with joy at Windsor Palace. Amadis and Oriana confess their urgent carnal desire for each other and agree to do something about it the first chance they get.

King Lisuarte holds court in London, and everything is going splendidly – or so it seems. Barsinan, the Lord of Saxony, arrives, and he has schemed with Arcalaus the Sorcerer to take the throne of Great Britain: Arcalaus will kidnap the King and Oriana, and, while Barsinan is fighting to take the crown, Arcalaus will behead the King and send Oriana to marry Barsinan. In exchange, Barsinan will make Arcalaus rich and powerful.

The next day, Queen Brisena, wife of Lisuarte, discovers that the beautiful crown and cloak, which she and the King had bought from a visiting knight, has disappeared, apparently by magic.

Later that day, a lady named Grovenesa arrives to the court to tell her story. A knight named Angriote d'Estravaus had long entreated her to marry, but she despised him, so she tried to get him killed. He fought with Amadis, who defeated him, but then they became good friends, and Amadis promised Angriote to help him wed Grovenesa. Later she met a brave knight who promised to do all he could to free Amadis from his promise, whether by persuasion or force, under the condition that she come to the King's court and fulfill a boon he would ask of her there. So she has come, and she sees the knight standing alongside the King, though she doesn't know his name.

That knight, Amadis, asks her as his boon to marry Angriote and convinces her that Angriote will be her ideal husband, thus freeing himself of his promise. The author attributes this marriage more to the will of God as a reward for Angriote's good behavior than to the cleverness of Amadis.

The King asks for the advice of the noblemen attending his court on what he should do to maintain and increase his honor. Barsinan tries to give bad advice, but the King in his wisdom ascertains the correct action, which is to hire the best knights he can afford from all lands. The Queen asks them to forever protect all ladies and damsels in Britain.

A damsel comes to the King and says she needs two skilled knights to free her father and uncle, who are being wrongly imprisoned by a lady named Madasima. Lisuarte sends Amadis and Galaor. But it turns out to be a trap. They are taken prisoner en route by Madasima, who says she will hold them in a vile dungeon forever unless they promise to leave the service of King Lisuarte. She is angry with the King because one of his knights, Amadis, killed a knight she esteemed, and she really wants to kill Amadis, but she will settle for this.

She doesn't know that she has Amadis and Galaor, and the damsel doesn't tell her, but the damsel's uncle tells them what to do to be freed, and Galaor volunteers to do it: seduce Madasima. Galaor does that easily, being skilled at such tasks, and agrees that he and the other knight will indeed leave King Lisuarte's service. Thus they are freed.

Meanwhile, back in London, the knight who had sold the King and Queen the beautiful crown and cloak has come to collect the goods or the payment, and since they no longer have the goods, he demands Princess Oriana in payment. So the King sends Oriana with him, accompanied by the Damsel of Denmark. Ardian, the dwarf in service to Amadis, rides off to tell him what has happened.

The King has accompanied Oriana to the forest so that no one will try to rescue her. There he meets the damsel to whom he had promised to prove he is worthy to reign over Great Britain. She asks him to avenge her by fighting a knight who has killed her father and raped her. But the King must come alone, and she has a magic sword and lance to him to use.

Of course it's a trick. The magic weapons break immediately, and the King is taken prisoner by Arcalaus and his knights, though he resists bravely. Arcalaus already has Oriana, since the knight who took her works for the sorcerer. All seems lost.

But, the author assures us, God is about to send help.

Ardian meets Amadis and Galaor on the road and tells them the news about Oriana. They ride to London, where they learn the King has been taken. Amadis's squire, Gandalin, gets the King's sword for Amadis from the Queen. As the brothers and their squires ride off in pursuit, they pause to talk to some woodsmen, who say that Arcalaus has taken both the King ... and Oriana.

The brothers split up, Galaor to rescue the King and Amadis to rescue Oriana. After a long chase, Amadis finds Oriana and defeats Arcalaus's knights. He almost kills Arcalaus, but the sorcerer gets away.

As they are traveling back to London, Amadis reminds Oriana that they had promised to consummate their love. So they leave the road and find a pleasant valley. Gandalin and the Damsel of Denmark make themselves scarce. And thus, in that green forest, the most beautiful damsel in the world becomes a woman, and, briefly, they are happy.
+
Posted by Sue Burke at 3:12 AM