How Sir Galaor freed King Lisuarte from the captivity in which he was being treacherously held. 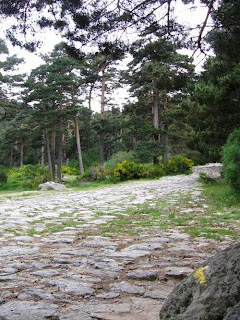 [This road up Fuenfría Valley in the Guadarrama Mountains has existed since Roman times. It was the main road between Madrid and Segovia throughout the Middle Ages, and the yellow arrow marks the Camino de Santiago pilgrimage route. Photo by Sue Burke.]
+

After Sir Galaor departed from his brother, as ye heard, he got on the road down which the King had been taken. He was anxious to ride as fast as he could, as one whose only concern was to overtake them and who thought about nothing that he saw except their trail. Thus he rode until the hour of vespers, when he entered a valley and found the hoof prints of the horses where they had stopped. Then he followed that trail as fast as his horse could carry him, for it seemed that they could not be far ahead.

But soon he saw before him a well-armed knight on a good horse, who came toward him and said:

"Stay, my lord knight, and tell me what concern makes you gallop so."

"By God!" Galaor said, "free me from your question, for if I were to delay with you, much evil could come from it."

"By Holy Mary," the knight said, "ye shall not pass from here until ye tell me or fight with me."

Galaor did not respond, and rode on. The knight of the valley said to him:

"Truly, knight, ye must be fleeing some evil deed. Now protect yourself, for I wish to learn of it."

Then he came at him with his lance lowered and his horse galloping at full speed. Galaor turned, but he threw his shield to his back, and when he felt him close, took his horse off the road and waited there. The knight missed him and passed him fast, as one who had a valiant and rested horse. He stopped a little beyond Galaor, turned around, raised his lance high, and said:

"Oh, vile and cowardly knight! Thou canst not avoid me by any means. Tell me what I ask of thee or die."

Then he charged, but Galaor, who had the better-trained horse, sidestepped the encounter and continued on as soon as he could. The knight could not stop his horse quickly, and when he turned around, he saw that Galaor had gotten far ahead. He said:

"May God help me, ye shall not leave me thus!" And since he knew the landscape well, he took a shortcut and went to block a pass. Galaor felt unhappy to see him there. The knight told him:

"Vile and heartless coward, now pick which of these three things ye wish: Or ye shall fight, or turn back, or tell me what I ask."

"Any of them troubles me," said Galaor, "and ye do me no courtesy. But I shall not turn back, and it would not be my wish to fight you, but if ye wish to know why I hurry, follow me and ye shall see it, for I would spend much time telling you it, and besides ye would not believe it, such is the disaster."

"In the name of God," the knight said, "ye may pass, but I tell you that ye shall not be rid of me for three days."

Galaor continued on with the knight behind him, and when they had gone a half-league, they saw a knight on foot chasing the horse from which he had fallen, and another knight was leaving him as fast as he could. The knight following Sir Galaor knew the knight who had been knocked down, who was his first cousin, and as fast as he could he went to catch the horse. He gave it back and said:

"What was this, my lord cousin?"

"I was riding," he said, "thinking about that of which ye know, so I was not thinking about myself, and I noticed nothing until that knight gave me a lance-blow on the shield. My horse was knocked to its knees and I fell to the earth, and my horse fled. Then I put my hand on my sword and called him to battle, but he did not wish to come and instead told me to remember to respond when someone called out to me. And by the faith that ye owe to God, let us go after him if we can, and ye shall see how I avenge myself."

"I cannot do this," said the cousin, "for I must follow this knight for three days." And he told him what had happened.

"Truly," said the knight, "either he is the greatest coward in the world or he is going to do some great deed, for if this is how he acts, I will leave aside avenging my injury to see what happens with this plight."

They saw that by then Galaor was far ahead, since he would not stop for anything, and the two cousins went after him. By then it was close to nightfall. Galaor entered a forest, and in the darkness lost the trail and did not know which way to go. Then he began to ask for the mercy of God to guide him so that he could be the first to arrive in rescue. He thought that the knights had gone off somewhere with the King to sleep, so he rode listening through several valleys from one side to another, but he heard nothing.

The two cousins rode on, thinking that Galaor was traveling ahead on the road, but after they had gone a league, they left the forest and did not see him, so they thought he had hidden from them, and they went to take shelter in the house of a lady who lived nearby.

Galaor rode everywhere through the forest, but since he had found nothing in it, he decided to leave and, in the morning, to climb a high hill to survey the land. He returned to the road which he had taken earlier and rode until he came out onto a plain.

Then he saw a small fire in a valley ahead, and when he went there he found a camp of mule drivers. When they saw him coming armed, they became afraid and took lances and hatchets and came at him, but he told them to fear no harm and instead asked them to give him a little barley for his horse. They gave it to him and he fed it to his horse. They asked him to eat, and he said no, but he would sleep a little if they would wake him before dawn. By then two-thirds of the night had passed.
+
Posted by Sue Burke at 11:51 PM