[How Galaor found the King and, with help, saved him.] 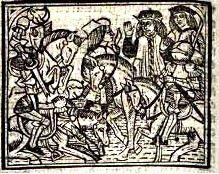 [Illustration for Chapter 36 from the 1526 edition, printed in Seville.]

Galaor lay down in his armor next to the fire to sleep, and when dawn began to break, he got up, for he had not slept deeply, as one who was worried he would not find what he sought. He mounted his horse, took up his arms, and commended the mule drivers to God, and they him. His squire could no longer keep up with him, and Galaor promised then and there, if God kept him safe, to get his squire a better horse. He went directly to a tall hill, and there began to study the land all around.

At that time the two cousins left the house where they had lodged to sleep. It was now morning. They saw Galaor, recognized him by his shield, and rode toward him. But as they did, they saw him descend from the hill in the other direction as fast as his horse could go. The knight who had been knocked down said:

"He just saw us and fled. Truly, I think that he is fleeing and hiding because of some evil deed. May God not help me if I can catch him and do not learn what this is about and make him pay, for I would not deserve God's help. Let us go after him."

But Sir Galaor, who was far from worrying about them, had finally seen some knights at a pass that led from the forest. Five rode ahead and another five rode behind, and between them rode some unarmed men, and he realized that they were the ones who led the King. He rode toward them as one who had already offered up his life to save another. When he neared, he saw the King in chains and felt so troubled by it that, not fearing death, he charged at the five who went ahead and said:

"Oh, traitors! Ye shall pay for laying a hand on the best man in the world!"

The five came at him, but he struck the first on the chest such that the iron and a piece of the shaft came out of his back, and he threw him dead on the ground. The others struck Galaor so hard that they knocked his horse to its knees with him on it. One thrust his lance between Galaor's chest and shield, but he lost it, for Galaor took it and went to strike another with it on the thigh, and it passed through his chain mail and leg and into the flesh of the horse, and so the knight was trapped. The lance broke there, and as Galaor put his hand on his sword, he saw all the rest coming at him. He entered in combat with them so bravely that no man could have watched it without being amazed by how he could suffer the many great blows that they gave him.

And as he was in this mortal danger, for there were many knights against him, God chose to help him with the two cousins who had followed him. When they saw him, they were amazed by the great skill of the knight, and the one who had followed him said:

"Truly, we had no reason to call that man a coward. Let us go help him in his great peril."

"Who would do anything other than help the best knight in the world?" said the other. "And do not believe that he would attack so many men except to right some grave misdeed."

Then they let their horses gallop and went to attack bravely, as those who are very valiant and wise about such things, for each had been a knight-errant for more than ten years. And I tell you that the first was named Lasadin the Swordsman and the other good knight Sir Guilan the Pensive.

At that moment Galaor was in great needed of their help, for his helmet had been cut and damaged in many places, and his chain mail rent everywhere, and his horse injured and close to falling, yet for all this he did not cease to work wonders and deliver such great blows to all those he could reach that they hardly dared approach, and he thought that if his horse could endure long enough, they would not defeat him, and in the end he would kill them.

But with the two cousins' arrival, as ye have heard, the battle became more fair, for they fought so well and with such strength that he was astonished, and thus he found he was freed from many blows which were now directed at them. Then he achieved rare deeds, for he could strike at will, and the damage he caused with the cousins in his aid was so great that very soon their opponents were all killed or defeated.

When Arcalaus's cousin saw this, he galloped at the King to kill him, but since all those who had been guarding him had fled, the King dismounted from his palfrey with the chain around his neck and took the shield and sword from the first knight who had died. The cousin tried to strike him on the top of his head, but the King raised the shield, which took the blow, but the sword sank a palm deep into its center and its point reached the King's head and cut the skin and flesh down to the bone.

But the King gave the cousin's horse such a blow with the sword in its face that he could not withdraw the blade. The horse bucked and fell on top of the knight. Galaor, who was now on foot because his horse could no longer move, had been running to rescue the King. He approached the knight to cut off his head, but the King shouted not to kill him.

The two cousins had chased a knight who was fleeing from them and killed him, and when they turned and saw the King, they were shocked, for they had known nothing about his captivity. They immediately dismounted, pulled off their helmets, and knelt before him. He recognized them, lifted them up by the hands, and said:

"By God, friends! At a good moment ye saved me. Sir Guilan's lover did me great wrong, for she separated him from my company, and because of her I lost you, Ladasin."

Guilan felt great shame and his face turned red, but not even because of this did he cease to love his lady, the Duchess of Bristol, and she him, for they had already achieved the aim that their love desired. The Duke always supected that it was Sir Guilan who had entered his castle when it was really Galaor, as this story has already told you.

But let us leave this now and return to the King and what he did after he was set free. Know that Sir Galaor got Aracalaus's cousin out from under his horse, removed the chain from the King, and put it on him. They took the horses of the dead knights, one for the King and another for Galaor, for his could no longer move, and with great joy they began to ride toward London.

Lasadin told the King everything that had happened with Galaor, and the King praised him highly for waiting to see what Galaor was doing. Guilan himself told him how he had been thinking so intently about his lover that he had noticed nothing else, and the knight had knocked him down without saying anything. The King laughed heartily at that and told him:

"Although I have heard of many things that men do for their beloved, I have never heard anything like that, so with good reason, as I see it, they call you Guilan the Pensive."

And of these and other pleasant things they spoke until they arrived at the house of Ladasin, who lived very near, and soon Galaor's squire arrived, then Ardian, Amadis's dwarf, who thought he might find his lord along that road.

Galaor told the King how he and Amadis had separated, and that the King ought to send an envoy to London, because the woodsmen would have spread the news and the entire court would be in an uproar.

"Since Amadis has gone to rescue my daughter," the King said, "I know I shall not lose her unless that traitor by deceit does some sort of sorcery. And as ye well said, the Queen should know what became of me."

So he sent one of Ladasin's squires who knew the land well to go at once with the news. Then the King lodged there that night, where he was well served. The next day they returned to the road, and as they went, Arcalaus's cousin told them how everything that had happened had been at the counsel of Barsinan, the Lord of Saxony, who had planned to become King of Great Britain. Thus the King decided to ride faster than ever to find him there.
+
Posted by Sue Burke at 2:39 AM