When and where does Amadis of Gaul take place? 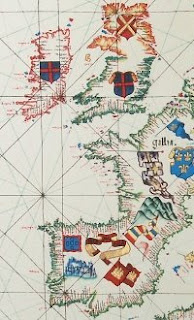 Amadis lives in Fantasyland. It never rains, the moonlight is always bright, and winter never comes.

Still, the text tells us that he is born shortly after the death of Jesus and well before the reign of King Arthur, which was around the sixth century — let's say Amadis takes place about 100 A.D. But Rome ruled much of Europe in 100 A.D., and Romans did not have knights in shining armor, castles, and chivalric love. In fact, the society in Amadis is conspicuously medieval.

The book opens in Little Brittany, wherever that is: someplace in Europe with wild lions. Some places mentioned are real, like Great Britain, Scotland, and Ireland, but others, like Leonis and many of the towns named, may be legendary or imaginary. Later on in the series of novels, the protagonists roam throughout Europe — a Europe where it never rains and the moonlight is always bright.

What about "Gaul"? Isn't that France? Maybe. Gaul is an old name for a region that includes France, Belgium, and parts of Italy, Switzerland, Germany, and the Netherlands. The Spanish title of the book is Amadís de Gaula, and "Guala" has no specific meaning in Spanish, but from what can be gleaned from the text, the kingdom of Gaula doesn't seem large. Maybe it's France, but the modern Spanish word for Wales is "Gales." Maybe Gaula is a medieval Iberian dialect word for Wales. Some scholars thinks so, but some say it means Brittany. Who knows?

We know for certain that Amadis lives at Ground Zero in Fantasyland, and all medieval fantasylands share specific space-time coordinates. They take place x) long ago, y) far away, and z) among legendary heros, that is, far removed from the social circuit of the reader, even though real kings like Holy Roman Emperor Charles V were among the genre's fanboys.

Don't be fooled. Whatever the text says, you can't go there except in your imagination. While it's a great place to visit, only Don Quixote decided to live there, and look what happened to him.
+
Posted by Sue Burke at 3:14 AM