What makes a good translation? 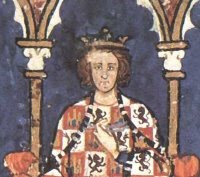 [Art: Alfonso X the Wise, King of Castilla y León from 1252 to1284, author and patron of the School of Translators in Toledo. He was key to the literary development of the Castilian language. Picture from his "Book of Games."]
+

Here are the opening lines of the Gospel of Luke, King James Version:

"Forasmuch as many have taken in hand to set forth in order a declaration of those things which are more surely believed among us, Even as they delivered them unto us, which from the beginning were eyewitnesses, and ministers of the word; It seemed good to me also, having had perfect understanding of all things from the very first, to write unto thee in order, most excellent Theophilus, That thou mightest know the certainty of those things, wherein thou has been instructed."

Here are the same verses from the New American Bible, translated by members of the Catholic Biblical Association of America:

"Many have undertaken to compile a narrative of the events which have been fulfilled in our midst, precisely as those events were transmitted to us by the original eyewitnesses and ministers of the word. I too have carefully traced the whole sequence of events from the beginning, and have decided to set it in writing for you, Theophilus, so that Your Excellency may see how reliable the instruction was that you received."

Which is version correct? Both. Which is preferable? That depends on you.

This translation of Amadis of Gaul depends on me. To my knowledge, there have been four previous translations into English: in 1589, 1702 (abridged), 1803 (abridged), 1974. I am satisfied by none of them. The most recent, by Edwin Place and Herbert Behm, follows the sentence structure of the Spanish original too closely, which I believe does deadly violence to English grammar, and sometimes renders the work incomprehensible. Readers of that translation come away with an inferior experience of the story than Spanish-language readers because they have had to struggle needlessly to understand the text.

Amadis is written in archaic and dialectal Castilian. Garci Rodríguez de Montalvo also "polished" its style, introducing many Latin grammatical elements, and created an linguistic example for others to follow. It reads beautifully, especially out loud, as ye have heard — and this book was often read out loud.

Some of the beauty comes from the possibility that Spanish grammar affords to loop the structure of a sentence like tatted lace: long, ornate, complex, impressive, and sonorous sentences, up to two hundred words long, at the end of which, often, the verb, taking advantage of the strength afforded by periodic structure, following the customs of Latin, and employing the flexibility of archaic Castilian, finally and felicitously appears.

Modern English grammar favors sentences that fly like arrows: straight and direct. It may take a volley to equal a length of that unique lace. Some of the original flourishes may be lost; in any translation some loss is inevitable. But in a careful translation, something gets added back. I hope I have kept losses to the minimum and used English-language resources to accent the drama for the solitary reader. Amadis should keep you up until late at night turning pages, just as it did five centuries ago.

I have left nothing out. I have tried to hew to the original text as closely as possible without committing barbarisms to retain its archaic flavor and carry you back in time to enjoy this transcendent, delightful adventure.

For more on literary translation, visit NPR:
The Art Of Translation
http://www.npr.org/templates/story/story.php?storyId=97002969&sc=emaf

A personal aside: My copy of the King James Bible was printed in Edinburgh in 1940 in 24 Ruby type, a book the size of my hand, specifically produced so that soldiers could carry it into World War II. It is a Bible made for a 20th century knight. I bought it from a church resale shop, so my money went on to do good deeds.
+
Posted by Sue Burke at 3:08 AM