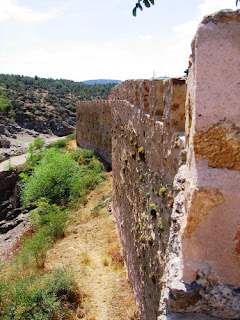 At the end of Book III, King Lisuarte sends away his daughter Oriana to marry the Emperor of Rome – against her wishes and everyone’s advice. But Amadis arrives at Firm Island and rallies the knights there to rescue her. They intercept the Romans’ fleet in the high seas, and after a great battle, they rescue Princess Oriana, and the ladies and damsels with her.

Queen Sardamira learns that the Romans’ leader, Salustanquidio, whom she loved, was killed in the battle, and she weeps and mourns. Oriana asks Mabilia to comfort her.

The knights agree to take Oriana, who is very grateful to them for their courage and effort, to Firm Island.

Grasinda is among those who welcome them at Firm Island. With great ceremony, Oriana and her companions are escorted to a beautiful tower in which to dwell, and all the victorious knights are given fine lodgings. The great love between Oriana and Amadis remains a secret.

Amadis lies awake at night thinking about what to do. Then he has all the knights called together and encourages them to prepare for war against King Lisuarte and the Emperor of Rome. Sir Cuadragante suggests sending messengers to King Lisuarte to see if the matter can be settled justly and peacefully while they prepare.

The knights agree. They begin sending emissaries to other kings and lords to ask for troops, including Amadis’ father, King Perion. Sir Brian of Monjaste, a Spanish prince, arrives and although he has doubts, he joins Amadis’s cause.

Sir Brian, Sir Florestan, and Agrajes visit Oriana to tell her their plans. She encourages them to seek peace with her father.

Amadis tells Lady Grasinda their plans, and she sends the doctor Elisabad to the Emperor of Constantinople to ask for help.

Amadis sends a messenger to Queen Briolanja, sends Gandalin to King Perion, and sends Sir Gandales to the King of Scotland.

Sir Cuadragante sends a messenger to Ireland, and Sir Bruneo sends his squire to his father.

Amadis sends an emissary to the King of Bohemia.

Gandalin visits Oriana and Mabilia before he leaves, and she asks him to help find a way for her to see Amadis without raising suspicions. He tells Amadis, who suggests a visit by all the knights.

The knights visit Oriana, and she and Amadis manage to speak privately of their love.

Back in Great Britain, Oriana’s mother is weeping because Oriana was sent away, but King Lisuarte is sure he did the right thing. Then some Romans who had escaped from Firm Island come and tell him everything about the battle and how Oriana was taken to Firm Island. After thinking deeply about it, he tells this to the Queen, then asks his most deeply trusted knights for advice.

Oriana sends a letter to her mother, asking her to try to persuade the King to agree to a peaceful solution that will be proposed by two knights being sent from Firm Island. The Queen gives the letter to King, who says he will see what the knights have to say. When Sir Cuadragante and Sir Brian of Monjaste arrive, he listens to them, then answers that unless amends are made for what was done, there is nothing to talk about.

King Lisuarte receives advice from his most trusted knights: King Arban of North Wales, Sir Grumedan, and Guilan the Pensive. They recommend raising more troops from all his vassals and friends and from the Emperor of Rome to fight the knights of Firm Island. King Lisuarte sends messengers to Rome and to many other places.

Meanwhile, Aracalaus the Sorcerer, sworn enemy of Amadis and King Lisuarte, decides to raise his own army. He plans that after the battle between Amadis and Lisuarte, when both sides will be weak, his army will attack the survivors. He goes to see King Arabigo of Arabia and many other lords who are enemies of Amadis and Lisuarte to ask for support and troops.

On their way home, Sir Cuadragante and Brian of Monjaste encounter Queen Briolanja of the kingdom of Sobradisa at sea, who is coming to Firm Island to see Oriana. They join her in the voyage, luckily for her, because her nephew Trion, who covets her throne, attacks. Cuadragante and Brian defeat him, and they continue on to Firm Island. Oriana welcomes Briolanja with great honors and friendship.

Sir Cuadragante and Brian of Monjaste tell the other knights at Firm Island that King Lisuarte wishes war and that he can call up many troops. They decide to recruit all the men they can to fight.

Elisabad arrives at Lady Grasinda’s realm and orders her troops be readied, then he goes to the Emperor of Constantinople to ask for his help, which is granted.

Gandalin arrives in Gaul, and King Perion agrees to help. Gandalin also visits Amadis’s brother, Sir Galaor, who is too ill to leave his bed.

Sir Bruneo of Bonamar’s father receives his squire and promises to send troops.

Amadis’s messenger is welcomed by the King of Bohemia, who also agrees to send help.

Sir Cuadragante’s nephew meets with the Queen of Ireland, and she sends men secretly to Firm Island. Her husband, King Cildadan, is King Lisuarte’s vassal and must help him.

King Lisuarte’s messenger, Sir Guilan the Pensive, arrives in Rome and tells the Emperor what has happened. The Emperor wants to take charge of the war against the knights of Firm Island, but Guilan realizes he would make a poor leader and urges him to work with Lisuarte. When he returns to Britain, Guilan warns the King about him. King Lisuarte is aware that many troops are being sent to Firm Island.

Thousands of knights begin to arrive at Firm Island. King Perion gives encouragement to Oriana, who is troubled because so many men will be put at risk because of her. Queen Briolanja has Trion brought to her to decide if he should be executed. He says he was motivated by bad advice, swears loyalty to her, and is pardoned. He joins Amadis’s troops. Elisabad arrives and reports that the Emperor of Constantinople is sending 8,000 men to Firm Island, and the Emperor’s 10,000 men are on their way to Britain.

The Emperor of Rome arrives in Great Britain, and King Lisuarte manages to keep him from attacking rashly. Instead the troops are allowed to rest and prepare before they march toward Firm Island.

King Perion, who is leading the knights of Firm Island, learns that King Lisuarte’s troops have begun to march, so he orders his men to move out from Firm Island.

Meanwhile, Aracalaus the Sorcerer, who has learned that the two armies are on the march, calls up his own army and begins the march toward his enemies.

Amadis defeats the King of Suesa, then both sides attack. Many knights are killed and injured, and after a long day of hard fighting, the Romans suffer the greatest losses. Fighting ends as night falls.

The next morning, fighting resumes. Agrajes tries to kill Lisuarte and fails, but Amadis kills the Emperor of Rome. By then the Romans have suffered so many losses that Amadis fears King Lisuarte will be killed, which would upset Oriana, so under the pretext that night is falling, he convinces his father to stop the fighting. Both sides set a two-day truce to bury their dead and treat their wounded men.

King Lisuarte realizes that his side is going to lose, but he prefers death to dishonor. The Romans agree to keep fighting.

Meanwhile, the holy hermit Nasciano, who had raised Esplandian, the son of Oriana and Amadis, has learned about the war and wants to stop it, although he is old and near-bedridden. He travels to Firm Island and talks to Oriana, who had told the priest in confession about her relationship with Amadis. He gets her permission to tell that to Lisuarte with hopes that the King will call off the war. He travels to Lisuarte’s camp and tells the King about their marriage and that Esplandian is his grandson. The King is willing to accept peace.

Nasciano travels to the other side to see Amadis, who favors peace. Then Nasciano talks to King Perion, who also prefers peace, and his knights agree.

Nasciano returns to King Lisuarte, and the Romans also agree to seek peace. Both sides decide to have delegations meet to work out the terms.

But the troops of Arcalaus the Sorcerer and King Arabigo are up in the mountains overlooking the battlefield, waiting to attack.