[How the King came to understand that he had received bad advice, and how Gandandel and Brocadan feared for their future.] 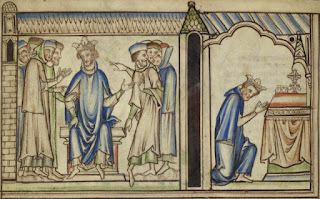 [Illustration for The Life of St. Edward the Confessor from a manuscript executed in about 1250 to 1260, in the University of Cambridge Digital Library.]

Sarquiles mounted his horse and used a shortcut he knew to arrive at Firm Island as fast as he could. Due to the labor of the road, he arrived with his horse weak and weary, and it could carry him no more. He found Amadis, Angriote, and Sir Bruneo of Bonamar riding along the seashore to prepare ships to go to Gaul, where Amadis wished to see his father and mother. Sarquiles was well received by them, and Angriote told him:

“Nephew, what trouble do ye have that ye brought your horse to such a bad state?”

“A very great one,” he said, “and I wished to see you and tell you something that ye need to know.”

Then he told them how the damsel, named Gandaza, had hidden him in Brocadan’s house, and repeated everything that he had overheard Brocadan and Gandandel say about the malice they had arranged between the King and Amadis. Angriote said to Amadis:

“Does it seem to you, my lord, that my suspicion was misdirected, although ye would not let me act on it? But now, if it please God, neither you nor anyone else can deny that these evil men have obviously done a great treason and vile deed to the King and to you.”

“Now, my good friend, ye may act with more certainty and righteousness than before, and may God help you with it.”

“Then I shall leave tomorrow at dawn of day,” Angriote said, “and Sarquiles shall come with me on another horse, and soon ye will learn of the payment that those evildoers shall receive for their malice.”

Immediately they went to Amadis’s lodging, which he always shared with Angriote, and they prepared everything that would be necessary for the trip. The next day they mounted and left for the place where they knew King Lisuarte was.

The King was deep in thought about the things Sarquiles had told him, waiting to see what would result from it.

One day Gandandel and Brocadan came to him and told him:

“My lord, we are worried that ye are not thinking about your estate.”

“Because some knights are coming from Firm Island,” they said. “They are your enemies, and without any fear they will try to enter your court and save these damsels from whom ye ought to have received that land. And if ye take our advice, before the knights arrive, ye shall have them beheaded and send orders to them not to enter in your land. With this, ye shall be feared, and neither Amadis nor they shall dare to anger you. As things are now, if they do not abandon their plans out of fear, they shall not do so out of virtue. My lord, order this be done immediately without any more discussion or delay, because when things like this are done quickly, they create more fear.”

The King remembered what Sarquiles had told him and realized he had been told the truth when he saw how eagerly they sought the death of these damsels. He did not wish to act with haste, and instead told them:

“Ye say two things that are both very weighty and very wrong: first, to kill the damsels without any form of justice. What account shall I make to the Lord, Whose minister I am, if I were to do that? He put me to act in His place so that things would be done justly in His name. If doing injustice and injury were to put great fear in people as ye say, in the end it would all justly and rightly fall on me, because when kings do cruelties more due to desire than reason, they trust their wisdom more than God’s, which is the greatest error possible. So the truest and most sure thing to make any prince secure in this world and the next one is to do things in accord with the counsel of people with good intentions, and to believe that although at the beginning he might encounter some difficulties, if he is guided by the just Judge, the end can only be good.

“The second thing that ye say is to send orders to these knights not to come to my court, and it would be a very dishonest thing to send away anyone who wishes to seek justice from me, especially if they are quite opposed to me. There is much honor for me to have in my hand and will the ability to do what they seek and so by necessity they must come to ask my judgement.

“So I will do neither of the things that ye told me, which I do not hold for good, and much less that which ye have counseled me against Amadis and for which I deserve great sorrow because never from him nor his family did I receive anything but service. If there were anything against them, others would have known or suspected something, but the only proof that has appeared is yours. Ye have advised me poorly and harmed someone who never deserved it. I, who erred, bear the penalty, and I think that in the end ye, who did not lead me to the truth, will also have to pay.”

He arose, left them, and went to his knights. Gandandel felt very frightened when he saw the King like that, for he did not know how to prove what he had said. Brocadan told him:

“Now is not the time to turn back, Gandandel, for little can be gained from so much harm. Instead, we should sustain all that we have said to the King more forcefully.”

“I do not know how this can be done,” Gandandel said, “because no one has been found who does not say the contrary.”

And so they stood, pondering in their hearts that which would make their error greater, as is natural among evil men.

The next day the King rode with a large company after having heard Mass. He went out into the country, and soon the knights arrived from Firm Island who were coming to free Madasima and her damsels. When the King saw them, he rode toward them to receive them because they deserved recognition for their great skill, and because he was very honorable to everyone.

They came before him with great humility. Their men put up tents in the field where they could stay, and the King traveled that far with them. As he was leaving, Sir Galvanes told him:

“My lord, trusting in your virtue and your good and just ways, we have come to ask for your mercy to hear Madasima and her damsels so they might receive justice. We are here to support their plea, and if we cannot do that, it will not trouble us to support them with arms, for there is no cause for which they should die.”

“For today, rest in your tents, and I shall do all that which rightly should be done.”

Sir Brian of Monjaste told him:

“My lord, we hope that ye shall do everything which becomes your royal estate and conscience. If anything in it is lacking, it will be due to bad advisors who do not protect your honor or fame. If it does not trouble you, I shall make it known at once to anyone who says the contrary.”

“Sir Brian,” the King said, “if ye had believed your father, I know well that ye would not have left me for another, nor would you have come to speak against me.”

“My lord,” Brian said, “my thoughts are for you. I do not ask you to do anything that is not right, but do not allow your grace to be injured by those who by fate do not serve you as well as I do. And as for what ye said, that if I believed my father I would not leave you, I did not leave you because I was never yours, although I am of your family. I came to your court to see my cousin Amadis, and when it did not please you to have him be yours, I left with him and did not err at any point from what I should do.”

As ye hear, this is what happened with Brian of Monjaste. The King went to the town and they remained in their tents, where they were visited by many of their friends. Regarding Oriana, I tell you that she never left her window, looking at those who loved her beloved so much, and she prayed to God to give them the victory that they sought.

That night Gandandel and Brocadan felt anguish in their souls because they could not find one good reason with which to uphold what they had started, but since they saw more danger in desisting, they decided to continue on.
+
Posted by Sue Burke at 3:50 AM