Summary of Book One

Four books form the novel Amadis of Gaul, and the first book is the oldest. 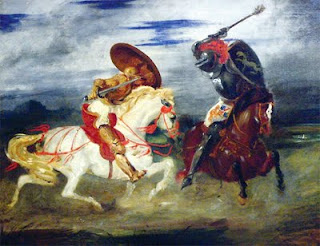 Although Amadis of Gaul was initially composed in the early 1300s and then added to later in the century, the only version we have is from 1508, complied by Garcí Rodríguez de Montalvo. A few fragments of an earlier version exist, and it seems he may have shortened the first three books but not changed them much otherwise. He also added the fourth book. Book One retains its distinctive medieval flavor. It was written to be read aloud to an audience, and it features interweaving plot lines and a large cast of characters.

The story begins as King Perion of Gaul is traveling through Little Brittany and stays at the castle of its King. Perion and Princess Elisena fall in love and meet secretly at night. After he leaves, she discovers she is pregnant. She gives birth in secret and the baby is cast into the sea with Perion's sword and gold ring, and a bit of parchment covered in wax giving the boy's name, Amadis.

The baby is rescued by a Scottish knight. He is called Childe of the Sea because no one knows his name, and he is raised alongside the knight's son, Gandalin. When the Childe of the Sea is seven years old, King Languines of Scotland visits and takes him and Gandalin to his court. When the Childe is twelve, King Lisuarte, who has just become King of Great Britain, leaves his ten-year-old daughter Oriana in Languines's court. It is love at first sight for both Oriana and the Childe, though they dare not speak of it to anyone, not even each other.

Meanwhile King Perion marries Elisena after her father dies. She does not tell him about Amadis. They have another son, Galaor, whom a giant carries away when he is two and a half years old because a prophecy says the boy will grow up to be a knight and recover the giant's kingdom, which had been stolen from him by another giant.

Years later, King Perion visits Languines seeking allies in his war with the King of Ireland, and Languines's son Agrajes volunteers. The Childe decides to become a knight to help, and Oriana arranges to have Perion make him a knight. Gandalin becomes his squire.

The Childe rides out and soon meets Urganda the Unrecognized, a sorceress who gives him a magic lance, which he uses in a series of fights to do justice. His fame grows. Eventually, he joins Perion's army and ends the war in a one-on-one battle to the death with the King of Ireland.

At that point, a friend of Oriana, the Damsel of Denmark, brings the Childe the parchment with his name on it. The ring and sword confirm that he is the son of King Perion and Queen Elisena, to the joy of all.

Amadis rides off to King Lisuarte's court in Windsor to be near Oriana and has a series of adventures on his way. His fame as a knight continues to grow. He knights Galaor, not knowing he is his brother. Galaor goes on to defeat and kill the evil giant who stole his adoptive father's kingdom, and then has a series of adventures of his own, some of which involve rescuing and then bedding damsels in distress; unlike the intelligent and chaste Amadis, Galaor is a comic character.

Amadis arrives at Windsor. He secretly meets Oriana at night in a garden, and they confess their love for each other. He enters the service of her mother, the Queen, but he really obeys only Oriana.

When Amadis learns he has a brother, he leaves Windsor in search of him and has another series of adventures. In one, he acquires a dwarf named Ardian as a servant, and in another, he meets Arcalaus the Sorcerer, who will become his lasting enemy.

Galaor has his own adventures that bring him and Amadis together. They fight and nearly kill each other before they discover that they are brothers. They travel back to Windsor together, and the trip includes a long and involved adventure.

Meanwhile, Arcalaus is plotting to take over the Kingdom of Great Britain, using both his sorcerer's skills and enlisting the aid of Barsinan, the Lord of Saxony. King Lisuarte holds a splendid court in London, but soon he is lured off and taken prisoner by Arcalaus's knights. Arcalaus also captures Oriana, and Barsinan takes over London. But when Amadis and Galaor learn of this, they ride to the rescue. Galaor frees the King while Amadis saves Oriana. Finding themselves alone, Amadis and Oriana consummate their love. Amadis then rides to London and defeats Barsinan.

King Lisuarte is restored to his throne, has Barsinan executed, and once again holds a splendid court. But Amadis had promised to help a beautiful young girl, Briolanja, regain the kingdom that had been stolen from her, so he goes off to help her with Galaor and Agrajes. En route, Galaor gets drawn off into his own adventure and discovers that King Perion had another son, Florestan. Meanwhile Amadis and Agrajes regain Briolanja's kingdom in brave combat, and soon they are joined by Galaor and Florestan.
+
Posted by Sue Burke at 3:01 AM