The road back to Windsor Palace is not fast or easy for Amadis, Galaor, and Balais. 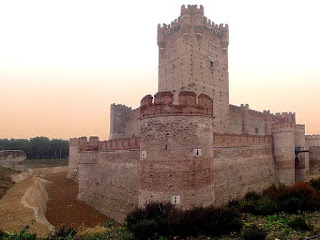 Castillo de la Mota (Castle on the Hill) in Medina del Campo, home town of Garcí Rodríguez del Montalvo, who created the only existing version of Amadís de Gaula. The castle was built on the site of a previous fortification in 1433. Its moat made it nearly impenetrable.

In Chapter 17, Amadis goes off in search of his long-lost brother, Galaor, and after several exciting adventures, they finally meet. Amadis is the best knight in the world; his brother may be the second-best; and neither can be surpassed in courage. Both are young, extremely handsome, and look almost alike: Amadis is a bit more husky and has curly blond hair.

However, Amadis is intelligent and moderate, while his brother is impetuous and a bit dense. Amadis loves Princess Oriana with his heart and soul, while Galaor has the habit of bedding the damsels whom he rescues. In short, Amadis serves as the paragon of knighthood, and Galaor as comic relief.

You can find a synopsis of earlier chapters and major characters at the website:
http://amadisofgaul.blogspot.com

Chapter 24
Amadis, Galaor, and their friend, a knight named Balais, take the road to the court of King Lisuarte in Windsor, but they find dead knight with a lance in his neck mysteriously laid out on a bier under a tree at a crossroads. Galaor declares he will find out how the knight was killed and, if necessary, avenge his death. Amadis, who is eager to return to Windsor and see Oriana, cannot talk him out of it.

As they wait alongside the corpse, a knight rides past beating a damsel with his lance, and Amadis, sworn protector of all ladies and damsels, charges off to save her.

Soon afterwards, a knight arrives with a tale of woe that makes Galaor and Balais laugh at him, so he attacks Galaor's horse. It runs away, and Balais mounts his horse to pursue the knight.

Galaor waits, night falls, eventually he naps, and while he is asleep the dead knight disappears. He hikes down the road and finds the knight laid out in the courtyard of a castle. He learns that the knight, named Antebon, had been murdered by a knight named Palingues, who also kidnaped Antebon's daughter. Galaor swears to his widow that he will avenge his death.

Galaor borrows a horse and rides to Palingues's castle, where he meets clumsy resistance. (Unlike Amadis, whose fights are always perilous and whose opponents are always skilled and cunning, Galaor's fights are comic.) Galaor kills Palingues and rescues Antebon's beautiful daughter, then they jump into bed.

Meanwhile, Amadis catches up with the knight and the damsel and defeats him despite his dishonorable conduct in battle, killing Amadis's horse. Amadis appropriates the now-dead knight's horse, and he and the damsel ride off. But it is late at night, and they soon pause to rest. While they sleep, another knight comes and takes the damsel away.

After a long search, Amadis finds that knight at his castle, but no one will not let him enter to talk to the damsel until morning, and then only after Amadis defeats a series of knights, each battle more perilous than the last.

Eventually, Amadis fights the knight who had stolen the damsel and defeats him, but the lady of the castle pleads for his life. Amadis assents and gets to talk to the damsel and learns that she is content to stay with the knight, since he loves her so much that he would fight Amadis for her.

But Amadis has also learned that the lady of the castle is the woman his friend Sir Angriote loves, though she disdains Angriote. Amadis, who had promised Angriote to help him win the lady, makes her promise to go to Windsor, where he knows Angriote is.

While Balais is pursuing the knight who had attacked Galaor's horse, he comes upon a band of five thieves who want to rape a damsel, so of course he rescues her, though the thieves kill his horse in the process. Balais and the damsel ride off together on her palfrey, and they find the knight Balais was seeking. Balais defeats him, breaks his sword, and takes his horse.

Thus Balais, Amadis, and Galaor arrive back at the tree at the crossroads, each riding a different horse than the one he started with, and each having rescued a damsel in distress.

Back at Windsor Palace, a well-dressed damsel arrives and makes the King promise he will prove to her that he is worthy to reign over Great Britain at the court he will hold soon in London.

Three knights arrive, and one shows the King a golden crown and the Queen a richly worked cloak, which they want. The knight says he must go, but he leaves the cloak and crown with the King and Queen, and they promise to pay him for them at the court in London.

Amadis, Galaor, and Balais arrive at Windsor Palace and are received with joy and celebration. Galaor becomes the King's vassal. Amadis talks with Oriana and confesses the urgency of his sexual desires. She says she feels the same way and promises to find a means of relief as soon as possible.
+
Posted by Sue Burke at 3:15 AM