How King Lisuarte was speaking with his knights about his wish to fight at the Island of the Boiling Lake to free King Arban of North Wales and Angriote de Estravaus from prison, when a giant damsel arrived from the sea and asked the King, in front of the Queen and his court, to have Amadis fight with Ardan Canileo. If Arden Canileo were defeated, the island would be subject to the King and he could free all the prisoners he wished, but if Amadis were defeated, they would want nothing other than to take Amadis’s head to Madasima. 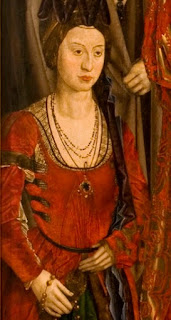 [Isabella of Coimbra (1432-1455), first wife of King Alfonso V of Portugal, a richly dressed lady of her time. Painting by Nuno Gonçalves.]

After Urganda had left, as ye have heard, several days passed. King Lisuarte was traveling through the countryside speaking with his knights about how he wished to take the Island of Mongaza, where the Boiling Lake was, to free King Arban of North Wales and Angriote de Estravaus, when they saw a ship coming by sea toward the port of the town to disembark. They went to see who traveled in it.

When the King arrived, a damsel and two squires were coming to shore in a launch. When they arrived, the damsel rose and asked if King Lisuarte was there. They said yes, and they were all amazed at her height, for in all the court there was no knight who was within a large palm of her. All her facial features and limbs were in keeping with her height, and she was quite beautiful and richly dressed.

She said to the King:

“My lord, I bring you a message, and if it please you, I shall deliver it before the Queen.”

“So it shall be done,” the King said.

He went to his palace and the damsel followed him. When they were before the Queen and all the knights and women of the court, the damsel asked if Amadis of Gaul was there, the one who had previously called himself Beltenebros. He answered:

She looked at him angrily and said:

“It could well be that ye are him, but now we shall see if ye are as good as your praise.”

Then she took two letters with golden seals that she brought, which were her credentials, and gave one to the King and the other to the Queen. The King said:

“Damsel, say what ye wish, and we shall listen.”

“My lord, Gromadaza, the giantess of the Boiling Lake, and the very beautiful Madasina, and Ardan Canileo the Feared, who shall defend them, have learned that ye wish to come to their land and take it. And because this cannot be accomplished without great loss of life, they say that there should be a trial by combat in this way: that Ardan Canileo shall fight Amadis of Gaul, and if Ardan defeats or kills him, the land shall remain free and ye shall let him take Amadis’s head to the Boiling Lake. If Ardan is defeated, they shall give all their land to you, my lord, and their prisoners, King Arban of North Wales and Angriote de Estravaus, shall immediately be brought here. If Amadis loves them as much as they think and wishes to make their hope in him come true, he shall grant the battle to free those two friends, but if he is defeated or killed, Ardan Canileo shall take them. And if Amadis does not grant the battle, he shall soon see their heads cut off in front of him.”

“Good damsel,” Amadis said, “if I grant this battle, how can the King be certain that your words will be complied with?”

“I shall tell you,” she said. “The beautiful Madasima, along with twelve damsels of high estate, shall enter into the custody of the Queen to guarantee compliance or their heads shall be cut off. And of you, Madasima wishes no other guarantee than if ye die, that she shall take your head and shall be given safe passage. And they shall do more. For this cause King Andanguel, the old giant, shall enter into custody with his two sons and nine knights, who control the prisons and towns and castles of the island.

“If these people place themselves in the custody of the King and Queen as ye say, those are very fine guarantees. But I tell you that ye shall not have my response if ye and the squires with you do not agree to dine with me.”

“Why do ye invite me?” she said. “This is not wise, and all your effort shall be lost because I despise you mortally.”

“Good damsel,” Amadis said, “this hurts me because I love you and would do you all the honor I could. And if ye wish my response, grant what I have asked.”

“I grant it, but more to make you respond as ye ought to than by my own free will.”

“Good damsel, it is a just cause for me to risk myself for those two friends and because by it the reign of the King can be increased, and for that I accept the battle in the name of God. May those of whom you spoke come here to be hostages.”

“Truly,” the damsel said, “ye have replied as I wished. The King must promise that if ye go back on your word, he shall not help you against the family of Famongomadan.”

“This promise is not necessary,” Amadis said, “for the King would not have anyone in his company whose word is not true. And let us go eat, for it is time.”

“I shall go,” she said, “happier than I thought, and since the virtue of the King is as ye say, I am satisfied.”

And she said to the King and Queen:

“Tomorrow Madasima and her damsels and the knights shall be here as your prisoners. Ardan Canileo will want to have the battle immediately, but it is necessary that ye grant him safety against everyone except Amadis, whose head he shall carry away from here.”

“My lady damsel, often those who think they will take another’s head in fact lose their own, and soon this may happen to Ardan Canileo.”

“Who are ye who speaks for Amadis?”

“I am a knight,” he said, “who would gladly enter into the battle if Ardan Canileo wished to have a companion fight me.”

“Ye are excused from this battle, but if ye wish to fight so much, the day after the battle I shall have my brother answer you. He is as mortal an enemy of Amadis as ye show yourself to be his friend, and I think, given how my brother is, that he shall remove your ability to speak for him ever again.”

“My good damsel,” Sir Bruneo said, “if your brother is as ye say, it would be good to go forward with that which ye promised in anger and rage. And ye see here my gage, for I wish to fight him.”

And he held his cloak out to the King, and the damsel took a silver net from her head and said to the King:

“My lord, see here my token that I shall fulfill what I have said.”

The King took the gages, but not to his pleasure. He was deeply troubled by what would happen between Amadis and Ardan Canileo, who was as valiant and feared a knight as any in the world. For four years the King had found no knight who would knowingly dare to fight him.
+
Posted by Sue Burke at 3:04 AM