[How the battle was arranged in which Amadis and Agrajes would fight King Abiseos and his sons Darasion and Dramis.] 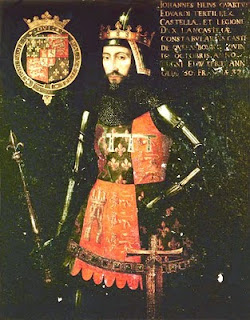 [John of Gaunt, 1st Duke of Lancaster. In 1386, he invaded Spain and tried unsuccessfully to take the throne of the Kingdom of Castilla y León.]

[Translator's note: The characters in this novel are almost exclusively nobles, and so they address each other with the formal "ye." Occasionally, however, they use the familiar "thou." This is usually a deliberate insult, a way to call someone lowly.]

Amadis spent five days in Grovenesa's castle with Agrajes, and when all things necessary for travel had been assembled, they left with Grovenesa, Briolanja, two damsels, and five men on horseback to serve them, and three palfreys led by the reins bearing their fine apparel. But Briolanja would only wear black clothing until her father had been avenged.

When they had gone a league, Briolanja asked for a promise from Amadis, and Grovenesa from Agrajes, which they granted, though they did not know or imagine what it would be. The women asked that they would not leave the road because of anything they saw without permission so that they not become involved in any conflict other than the one they were headed toward. It grieved the knights to agree because in some places their help was needed, which they might have rightly employed, but they could not, and so they felt ashamed.

After twelve days of traveling, as ye hear, they arrived at the lands of Sobradisa on a dark night. Then they left the main road and took a side road for three leagues. When a good part of the night had passed, they arrived at a small castle which belonged to a lady named Gabalumba who had served Grovenesa's father and who was very old and wise. They called at the gate and the residents of the castle came out, and the lady and all her household were very happy to see them. They opened the gate and took them in, where they gave them dinner and beds in which to rest and sleep.

The next morning, Gabalumba asked Grovenesa why they were traveling. She told her how Amadis had promised Briolanja to avenge the death of her father, and that she should believe without a doubt that he was the best knight in the world. She told how he had met them on a road on which she and Briolanja were traveling, and he had defeated eight very good knights that she had brought as guards in order to see who was in the carriage, and she had also seen him fight in the castle against her men, when he was rescued by lions. [Chapter 21.]

The lady was amazed by the skill of the knight and said:

"Since he is so skilled, his companion should also be worthy, and they may well accomplish the deed that they so rightly undertake. But I fear that traitor may kill them by some trick."

"This is why I have come to you," Grovenesa said, "so that ye could give me some counsel."

She took some ink and parchment and wrote a letter, sealed it with Briolanja's seal, spoke privately for a while with a damsel, gave her the letter, and told her what to do. The damsel left the castle on her palfrey, and rode hard until she arrived at the great city named Sobradisa, from which the kingdom took its name, where Abiseos was with his two sons, Darasion and Dramis. These were the ones against whom Amadis would fight, for Abiseos had greedily killed Briolanja's father, who was his older brother, in order to take his kingdom, and then reigned mightily, more by force than by the assent of the people of that land.

When the very richly attired damsel arrived, she immediately went to the palace of the King and entered the gate on horseback. The knights came to help her from her horse, but she told them she would not dismount until the King saw her and ordered her to do so, if it pleased him. Then they took her by the reins and led her to a hall where the King was with his sons and many other knights. He ordered her to dismount the palfrey if she wished to say something.

"I shall do so on the condition that ye take me under your protection so I shall not be harmed for anything I say to you or to anyone else here."

He said that he would give her his protection by his royal honor and that she could speak without worry. Then she dismounted the palfrey and said:

"My lord, I bring you a such a message that it should be told in the presence of all the leading nobles of the kingdom. Order them to come and ye shall hear it then."

"As it happens," the King said, "they are all here as ye wish, for I had them come six days ago to deal with certain matters."

"That greatly pleases me," she said. "Then order them to gather here."

The King ordered them to be called, and when they had come, the damsel said:

"King, this letter is sent to you by Briolanja, whose inheritance thou hast taken. Order it to be read before these people and give me thy answer as to what thou shalt do."

When the King heard his niece Briolanja mentioned, he felt great shame, considering the wrong he had done her, but he ordered the letter read, only saying that all should believe what Briolanja's damsel would say on her behalf. The people native to the kingdom who were there, when they realized that the message was from their lady, felt great pity for her in their hearts because her kingdom had been unjustly taken, and they silently asked God to remedy the situation and not permit such a great treason to last much longer.

The King said to the damsel:

"Tell us what it says, for you shall be believed."

"Lord King, it is true that ye killed Briolanja's father and confiscated her land, and ye have said many times that ye and your sons would defend by trial at arms that what ye did was just. Briolanja orders ye be told that if ye still hold that, she shall bring here two knights who will fight for her over this question, and they shall make you know the disloyalty and great arrogance that ye did."

When Darasion, the oldest son, heard this, he was very angry, for he was generally irascible. He stood up and, without his father's approval, he said:

"Damsel, if Briolanja has these knights and they wish to fight over that question, I promise to fight myself, and my father, and my brother. And if I do not fulfill this, I promise before these knights that I will order my head to be cut off and delivered to Briolanja to pay for her father's head."

"Truly, Darasion," the damsel said, "ye respond like a knight with great courage, but I do not know if ye do it out of anger, since I see that ye are irate, but if ye and your father agree with what I shall now say, I shall think that ye do it out of goodness and with the burning spirit within you."

"Have your father offer his assurance to our knights on behalf of all those in this land that if anything ill-fated were to happen in the battle, they shall cause them no harm, and only ye three shall fight. And if ye give this assurance, they shall be here within three days."

Darasion knelt before his father and said:

"My lord, ye have heard what the damsel asks and what I have promised, and since my honor is yours, grant what she asks, since if not, they shall be the winners without a fight, and both ye and we would be at fault, for we have always pledged that if anyone were to impugn you over the propriety of what ye have done in the past, we three would avenge it in battle. And even if this had not been promised, we should take up this challenge against us because, as I have heard, these knights are madmen from the court of King Lisuarte who have more arrogance than brains and hold themselves in great esteem, despising others."

The time had come, as permitted by the Lord most high, for his treachery to be punished, as ye shall hear further on.

When the damsel saw that her message had been fulfilled, she said to the King and his sons:

"Prepare yourselves, for tomorrow those whom ye shall fight will be here."

She mounted her horse and rode fast until she arrived at the castle and told the ladies and knights how her message had been fully executed, but when she said that Darasion believed them mad for belonging to the court of King Lisuarte, Amadis was moved to anger, and he said:

"Well, even in that court there are those who would think little of smashing his arrogance and even his head." But then he realized that anger had overcome him and he regretted what he had said.

Briolanja, whose eyes had never left him, said in response:

"My lord, ye could not say nor do anything against those traitors that they do not fully deserve, for as ye know they wrongly killed my father and took my inheritance a long time ago. Have mercy on me, for I place my fortune in God and in you."

Amadis, whose heart was subdued and made gentle by virtue, felt sorrow for that beautiful damsel and told her:

"My good lady, by the hope ye have in God, I promise that tomorrow before nightfall your great sadness shall become great and shining joy."

Briolanja knelt and wanted to kiss his feet, but he stepped back with embarrassment, and Agrajes took her hands and rose her up.

Then it was agreed that they would leave the next morning at dawn, and when they were half a league from Sobradisa, they would go to hear Mass at the Hermitage of the Three Fountains, which was there. So that night they rested very joyfully and with pleasure.

Briolanja, who spoke often with Amadis, frequently felt moved to ask him to marry, but she feared that his heavy thoughts and the tears that she sometimes saw on his cheeks were caused not by any weakness in his mighty courage but because he was tormented, subjected and afflicted by another woman for whom he felt the same passion that she suffered for him. And so her will was detained by her reason, and she refrained from asking. She left him so he could get some restful sleep and arise at the given hour.
+
Posted by Sue Burke at 3:03 AM