A reprise of the most recent adventures of the greatest knight in the world. 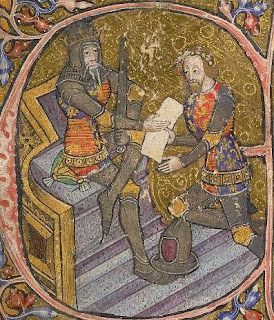 [A 14th century manuscript initial depicting Edward III of England with his son the Black Prince kneeling in front of him.]

Amadis and Princess Oriana are secretly in love, so to be near her, he has placed himself at the service of her mother, Queen Brisena, wife of King Lisuarte of Great Britain. The Queen sent him to search for his long-lost brother Galaor in Chapter 17. Amadis has had many adventures during his travels; meanwhile, so has Galaor and other characters in the novel. Intertwining plot-lines are a standard feature of medieval stories.

You can find a synopsis of Chapters 0 to 20 here, and a list of the major characters here.

A knight tricks Galaor out of his horse, so Galaor catches up with him and kills him. However, a damsel in league with the knight then tricks Galaor into granting her a boon in revenge, and she travels with him, insulting him continuously.

Amadis sees a mysterious carriage being drawn through a field near a castle and defeats the knights guarding it to see what is inside: the marble coffin of a king with his crown and head split in half, along with a beautiful girl, and a lady who is understandably angry with Amadis. He leaves, but later the lady sends a knight to ask him to come to her castle so she can make amends.

But that turns out to be a trick. The lady's knights attack Amadis. Although he fights valiantly, he would have been defeated, but the beautiful girl releases two lions to frighten his attackers, and he escapes and closes the gate, leaving the lions loose inside the castle. The girl persuades Amadis to open the gate to let the lions out, and the whole thing turns out to be a test to find a knight brave enough to avenge the beautiful girl's father's death. He was a king who was killed by his brother, who split his head with the crown on it in half and took over his kingdom. The girl barely escaped to the protection of her aunt, the lady. Amadis agrees to return in a year to win back the girl's kingdom for her.

Amadis rides off, but soon he encounters an armed knight, riding with a damsel, who attacks a dwarf who had become Amadis's vassal in Chapter 19. Amadis defends the dwarf, but the other knight as as strong and skilled as he is, and the fight goes on for hours. Then another knight, Balais, comes along and talks with the damsel. It turns out that the damsel is the niece of the Sorcerer Arcalaus. Amadis had fought him in Chapters 18 and 19 and freed many knights and men from Arcalaus's hellish prison. The damsel has demanded a boon from Galaor: to give her the head of the dwarf. She hopes that Amadis and Galaor will kill each other in the fight. With their helmets on, they don't recognize each other.

Balais, however, is one of the knights Amadis had freed from the prison, so as thanks, he draws his sword, lops of the damsel's head, makes Amadis and Galaor stop fighting, and takes them to his castle to recover from their wounds.

The knights Galvanes, Agrajes, and Olivas arrive at Windsor Palace. Agrajes talks to Princess Olinda of Norway, his secret love, and other people catch up on news. As dinner is about to begin, the knight Angriote arrives; he had fought with Amadis in Chapter 18 but then turned into a loyal ally; he brings some news about Amadis, which everyone is waiting for. Then the dwarf arrives to say that Amadis has found Galaor and will return to Windsor soon. There is much rejoicing.

Amadis, Galor, and Balais set out for Windsor, and although Amadis had hoped for a quick and uneventful journey, they discover a murdered knight laid out beneath a tree. Galaor declares he will not leave until he finds out what has happened. While they are waiting, a knight rides past beating a damsel, and Amadis, always ready to help a damsel in distress, rides off after them. Then a knight comes and attacks Galaor's horse, and Balais rides off after that knight.

Galaor is alone with the corpse during the night, falls asleep, and awakes to find it gone. He starts hiking to try to find out what has happened and eventually finds the knight, named Antebon, laid out in the courtyard of a castle. He learns that a knight had kidnaped Antebon's daughter, then foully murdered Antebon to prove his valor. Galaor vows to avenge his death.

Galaor goes to the murderous knight's castle and kills him. In gratitude, Antebon's daughter jumps into bed with Galaor. This sort of thing happens to Galaor a lot.
+
Posted by Sue Burke at 1:32 AM