A quick recap of the story so far, for new readers or bewildered followers. 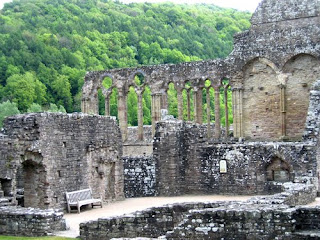 [Tintern Abbey, Wales. The Cistercian monastery was founded in 1131, and the buildings date from the 12th to 16th century. The monastery was dissolved in 1536 and fell into ruins. These days it is a popular tourist attraction. Photo by Gwyneth Box.]

King Perion of Gaul, while visiting the King of Little Brittany, falls in love with his daughter, Elisena, who feels the same. [Chapter 0]

They meet for several secret midnight trysts. After he returns home, she discovers she is pregnant, and with the help of a friend, she gives birth in secret. They put the baby boy in a wooden ark in a river with Perion's sword, gold ring, and a note covered with wax saying that the baby is named Amadis. The ark quickly floats into the sea, where, by divine miracle, Scottish knight named Gandales finds it while sailing home, and he adopts the boy as his son. [1]

Perion has a dream analyzed about the tryst. Gandales hears a prophecy about the brilliant future of the childe from Urganda the Unrecognized, a sorceress who protects Amadis; she is called "unrecognized" because she can look like anyone. [2]

When the Childe of the Sea (as Amadis is called) is seven years old, King Languines of Scotland visits and takes the Childe and Gandales's son Gandalin with him to his court. After Elisena's father dies, King Perion marries her. She does not tell him about Amadis, but they have another son, Galaor, whom a giant carries away when he is two and a half years old. The giant has a monk raise the boy because a prophecy told him that the boy will grow up to be a knight and help him take back his kingdom. [3]

Lisuarte has just become King of Great Britain, and while sailing home from Denmark, he leaves his ten-year-old daughter Oriana in Languines's court because she is seasick. The Childe of the Sea is twelve years old. They immediately fall deeply in love, but dare not speak of it to anyone, even each other.

But several years later, the Childe decides to become a knight to impress her. Gandales sends him the sword, ring, and wax-covered note, and Oriana takes the wax. The Childe learns from Languines that Gandales was not his father, but his true father is unknown.

King Perion stops at Languines's court looking for allies in a war with the King of Ireland, who has invaded his kingdom, and Languines's son Agrajes volunteers to help. The Childe tells Oriana he wants to become her knight and fight in the war, and she happily arranges to have Perion knight him in secret. Gandalin becomes his devoted squire.

The Childe rides out before dawn, and immediately comes to the aid of a badly injured knight whose wife has betrayed him. She sends her brothers to attack the Childe. He defeats them in a battle. [4]

Urganda the Unrecognized gives the Childe a magic lance. A damsel from Denmark (the Damsel of Denmark) meets him on the road and accompanies him as he uses that lance to rescue King Perion from death in castle of an ally of the King of Ireland. Perion is very grateful; the Childe continues on his quest for noble deeds; and the Damsel of Denmark goes on her way, which is to Oriana. Meanwhile, Galaor has grown up and wants to become a knight, so the giant comes and takes him to be trained. [5]

The Childe meets a damsel who has just been raped by an evil knight who assaults all passing damsels and ladies, and defeats and humiliates all passing knights. The Childe gets justice for her by killing the knight's soldiers, brothers, and finally beheads the evil knight in a spectacular fight. The damsel, thus avenged, continues on her way to see Agrajes with a message. [6]

In King Languines's court, they learn the Childe of the Sea has become a knight and is doing amazing deeds. Oriana is very happy. [7]

King Lisuarte calls his daughter Oriana back to his court. As she packs, she finds the note inside the wax, and sends the Damsel of Denmark to bring him the news of his name. After some minor adventures, the Childe of the Sea joins Agrajes to sail off to the war in Gaul. King Perion welcomes them. They fight a heated battle with the King of Ireland and his men. The Childe fights amazingly well and saves them from defeat, and the battle ends with an agreement to end the war with hand-to-hand combat between the King of Ireland and the Childe. The winner gets Gaul, the loser gets death. [8]

In an especially vivid and exciting chapter, the Childe defeats the King of Ireland. Afterwards, the Damsel of Denmark delivers the note from Oriana. If you haven't read this chapter, you should. [link to Chapter 9]

The Childe's gold ring and sword cause King Perion and Queen Elisena to realize that he is their son and his name is Amadis. There is much rejoicing. Eventually Amadis leaves for to King Lisuarte's court in Windsor to be near Oriana, but on the way, he meets a damsel sent by Urganda with a message for him to come help her. [10]

Galaor and the giant are traveling to King Lisuarte's court to have him knighted, but on the way, they see an amazingly skilled knight attack a moated castle and defeat its guards and knights to free a prisoner inside for a woman named Urganda. Galaor wants that knight to make him a knight, and he refuses out of humility, but Urganda orders him to. After he leaves, Amadis learns it was his brother.

Galaor, traveling with his stepfather giant, learns he is Amadis's brother. They arrive at the castle of the evil giant who stole Galaor's stepfather's lands, and on the way they meet two damsels who accompany them. [11]

Galaor defeats the evil giant, which makes everyone very happy. But soon, Galaor travels with one of the damsels to meet her lady. On the way they skirmish with a dwarf and his soldiers and knights, who seems to know the damsel.

Amadis is insulted by an arrogant knight named Dardan as he travels to Windsor; this inspires the author to deliver a sermon against pride. Amadis meets two damsels and learns that a woman will have all her estate given to her stepdaughter, Dardan's lover, if no one challenges Dardan in a trial by battle. After some minor adventures, he and the damsels arrive at Windsor but camp nearby in the forest. Amadis defeats Dardan in a battle witnessed by King Lisuarte, his court, Oriana, the Damsel of Denmark, and the townspeople, but Amadis rides off before he can be identified. [13]

Galaor goes to town, meets the Damsel of Denmark, then Oriana, and arranges for Amadis to sneak into a garden at night to talk to her. He does, and they confess their love for each other, knowing that, since he is the natural son of a minor monarch and she is the daughter of the known world's greatest king, they have little hope for satisfaction of their mortal desires. [14]

King Lisuarte is holding the woman Amadis fought for as a prisoner until her champion comes forward. Amadis, humble to a fault, does not believe he is worthy to present himself to such a great king, but he does it on behalf of the woman. King Lisuarte is desperate to ask him to be his knight, but he also promised to ask nothing of Amadis in exchange for learning who the mysterious knight was. Instead the Queen and Princess Oriana and the other ladies and damsels of the court ask Amadis to be their knight, and, under Oriana's orders, he agrees.

Meanwhile, Galaor, who had just left the Duke of Bristol's castle, goes to another castle to get a wound treated, but instead he is attacked and must fight for his life. More comic violence ensues. After he has killed everyone, he discovers a lovely damsel being held prisoner, whom he rescues, and in gratitude she treats his wound and his amorous desires. [15]

The story has been telling parallel adventures of Galaor and Amadis, contrasting their characters as well as alternating drama with comedy, and it will do so again, as ye shall soon see.
+
Posted by Sue Burke at 3:55 AM